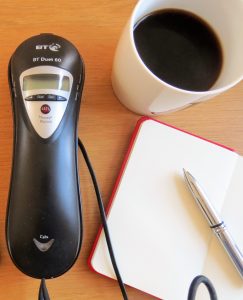 I started my career selling recruitment advertising on the telephone. On my desk there was a phone and boxes of cards with contact details for potential advertisers and notes from previous conversations. I went on to recruit, train and coach sales people to confidently start conversations on the phone and that approach worked just fine.

Then computers came along and with them, the internet and email.  The internet gave me access to more information than I could use. And email seemed to offer a promise to make starting and having conversations easier. This would have been fine, except everyone started doing it!

Instead of bringing me closer to my members to be, email started to do the opposite and push people away. My emails started to be a less effective way of starting a conversation and I thought, “It’s still about conversations. But how I start conversations would have to change.”

I had created my Influencer group and I was working with them to bring their stories to a wider audience. I had the speakers and I had their stories to use as content. What I needed was a room where they could meet and share their experiences. And being a national organization with members everywhere, it made sense for that room to be online. I looked at our Association’s Linked In group and thought- how can I make that work, make it more vibrant and turn it into a place for conversation and discussion?

I thought it would make the perfect magnet. If I took my stories and spun a question out of each one and posted it into the Linked In group then perhaps people would start interacting. My thinking was that people think better if they’ve got something to scratch their brains against.

It started to work.

And my Influencers understood what I was trying to do. They started to contribute, and behave just like the innovators they are. They got things moving by contributing their points of view and experiences to the discussions and, importantly, began to talk to each other.

The impact began to be visible. These conversations started to generate interest in the Association. As a result I started to see more people calling me to talk about membership, rather than the other way around. But I also wanted to be able to start individual conversations myself.

The thing is though, you can’t just start sending out sales emails. When you’ve coaxed people towards you, starting a pitch just feels like you’re giving them the ‘hair dryer’ treatment. It doesn’t feel right and what’s more it doesn’t work.

What do you do? I decided that a better approach was to simply ask them if they’d be interested in having a conversation. I would then invite them to choose what they want it to be about. This became the agenda for the discussion. We agreed a time to speak. And then I would call them on the telephone.

We began to pull people towards us. And that’s how it starts. That’s how you begin to make a pull strategy work for your Association. And this can be used whenever the success of what you’re doing requires you to engage your members and get them into conversations that help them feel engaged with you and your Association’s mission. The interaction that you create can help them on their way to achieving their goals which makes it a virtuous circle.

Can I help you when it comes to engagement? Why not get in touch for a chat.